Review: Final Girls Presents – We are the weirdos

We are the Weirdo’s was the latest event hosted by the Final Girls group that have hosted various screenings up and down the UK which primarily focus on women in horror both in front of and behind the camera. This latest project was a showcase of 10 short films all directed by women. Final Girl co-founders Anna Bogutskaya and Olivia Howe provided an intro before the shorts where they actually explained that they accepted short submissions from anyone and did not originally envision a purely female directed line-up. However of all the entries they received (over 1300, many of which they noted were awful but they also noted there was several great ones and it was hard to narrow to 10) the best ones, or the one that most resonated with them the most, were the female directed ones they were about to present and it has certainly been a fruitful time for women in horror recently with the last few years bringing us the likes of “The Babadook” (Jennifer Kent), “A Girl Walks Home Alone at Night” (Ana Lily Amirpour), “The Invitation” (Karyn Kusama), “The Love Witch” (Anna Biller), and “Raw” (Julia Ducournau). That in mind it also seems hard to argue with the poster tagline for the event which is “The Future of Horror is Female”. After the intro we dived into the films:

Right from the off everything about this short scream’s 80’s from the music (provided by John Carpenter himself!) to the titles to the lighting it is a very clear homage to 80’s slashers. The set-up is simple with a group of friends entering a bar after-hours were they convince the barman to give them a drink and then started to be picked off one-by-one by a supernatural killer. In some ways it is a slight short. It unravels in an entirely predictable manner. It also cheesy and hammily acted (although I presume deliberately so for the most part) and it kind of does not add up to much. That said there is a goofy joy to it and a nice cameo from John Carpenter as a taxi driver. While some of the individual shots are also impressively staged given it could not have had that much of a budget. So despite some shortcomings most horror fans should get a kick out of it. 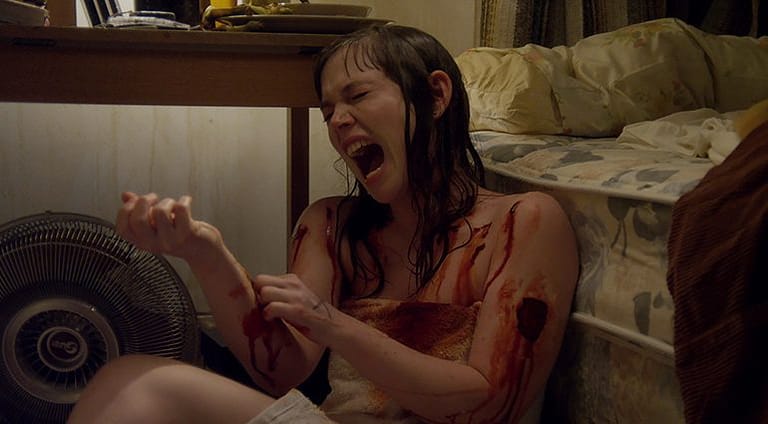 While not as overtly reference laden as the opening film this one also brought to mind a lot of other films, mostly the body horror of David Cronenberg. It tells a tale of a socially awkward girl who hooks up with a guy at a party only for her start falling apart…literally! It is certainly a gruesome watch as gore effects, as the poor girls skin begins to peel away, are brutally realistic. It is an uneven watch though as while it touches on some decent themes about fears of female sexuality and female’s fears around sex it feels like more could have been done with these. The acting is solid but unremarkable and it probably could have been a little tighter. All that said you could certainly see potential here.

The third short told a story of a husband attempting to cheat on his wife only to be stopped in his tracks as his technology, first his phone then other appliances, start to turn against him. Which is because they have been taken over by a ghostly bride. This particular tale brought at least one very decent jump scare but it seemed overall overshadowed by it influences, most notably the influence of the Ring and similar J-Horror. Also the way it was filmed, as if you are watching the whole thing over a webcam, may have seemed like an innovative choice but to your reviewer here it seemed on the gimmicky side and did not add much to proceedings.

I Should Have Run (Dir: Gabriela Staniszewska)

Of the 10 shorts on display this had to be one of most innovative and original. Certainly unlike the 3 which proceeded it was difficult to come up with obvious cinematic reference points. It was very simple tale playing on the age old fear of walking through a dark park home alone at night but it tells that tale very effectively. It also tells it in a unique way as there is no dialogue only a poetic verse narration. While it is generally excellent what makes it all the more remarkable is that was made on a budget of only £200! If there a slight knock to be made it is that director Staniszewska is possibly not the greatest actress as her reactions are a bit over-the-top but that does not lessen the  overall brilliance of  this atmospheric piece.

We open here in a café in Vancouver. Waitress Charlotte is being chatted up a bit by a customer late night which, as you may guess, it does not turn out well for him. While still horror this is obviously played more laughs. With its bright colour palette and soapy acting there is a pleasing Twin Peak’s vibe to this one. On the downside Charlotte’s switch from “ordinary” waitress to sociopath seem quiet jarring and sudden and the filmmaker could have spent a minute or two giving the viewer a greater sense of her built up frustrations at the daily indignities she has put up from sleazy male customers. Mixed but it is still watchably grisly fun.

This effort was both brilliant and frustrating. It was brilliant in look and the set-up really drew you in. The opening scene where a circus family stand around a table performing some unseen ritual is a magnificently evocative one. The visual stylings are effective. The circus setting and off kilter, dream/nightmare-like nature of it bringing the Jodorowsky classic Santa Sangre strongly to mind. Adding to the nightmare sense is the jarring disorienting editing which is music video like or like the best of Rob Zombie (say what you want about Zombie but there is a visual brio to his best work). The frustrating element comes towards the end after setting up this world beautifully and tapping into your dark imagination as to where it might go, it goes in a rather boring torture porn direction which felt a little hack given what had gone before and, for your reviewer here anyway, took the sting out of the tale. That said based on the visual imagination and editing I would very interested to see where this director goes next in her career.

The only non-fiction short of the bunch. This is an intriguing and beautifully filmed, if not wholly convincing, short documentary that touches on a very taboo subject. Namely Necrophilia. With the unseen narrator being a real life Necrophiliac. Now in case you are wondering, “why is she not in jail?” The narrator explains that neither she nor many of the people she knows in this subculture have actually slept with a corpse but thought of corpses and dead flesh do excite them sexually. While the narrator tells her tale there is a tableaux of images that come across the screen including many of insects and parasites (possibly symbolising decomposition), various models in corpse like states (which was both chilling and very well done) and beautifully shots vistas of mountains and forests. This last element left your reviewer somewhat confused but could have just been visual light relief given the subject matter. In some ways it did not seem to quite hold together but it was a curious peek into an unseen and taboo subculture.

Well the previous entry was the only documentary and this one was the only animated feature of the bunch. As it uses stop-motion to tell the story of a teenage girl called Layla who keeps having intrusive thoughts of either murder or self-mutilation every time she picks up or comes in to contact with sharp objects. While obviously in this character it is done to the most exaggerated degree, the animation, does very deeply tap into that fear that a lot of people have of “what is the worst that could happen or I could do with this?” when people pick up a sharp object be it a pizza cutter or a pair of garden shears. In a very short time it fleshes out this character and her fears effectively and not only that her relationship with her annoying little brother is beautifully drawn as well. It was a scary, humorous, touching, absolute gem of a short.

Shortcut is a very short short. Clocking a mere 5 minutes and basically it is a set-up to a gag. A gag where the punch line is really quite obvious. Here is the thing though despite the obviousness of what that punch line is. It does not make it any less hilarious. It is an excellent illustration of that certain type of guy that is boorish, loud, think he is always right and always, ALWAYS thinks he knows the best shortcuts to take wherever he maybe. You crave to see this obnoxious character get his just desserts and, of course, he does and in hysterical fashion. Also while I did say it is obvious when you watch it, I am not going to spoil that fashion here. Suffice it to say that it got a belly laugh from your reviewer as well as the rest of the audience in the cinema too.

I Want You Inside Me (Dir. Alice Shindelar)

This was a second viewing for this one as I had previously seen it earlier on in the year at the Dead by Dawn festival. As is quite often the case I actually thought it was better the second time round which is curious as it has a twist ending, where you understand the precise meaning of the title, and usually things that have a twist the effect is lessened upon rewatching. However before the ending there is an engaging mystery as an innocent teen loses her virginity in a cave in the woods only for her to blackout on the point of orgasm and her boyfriend to disappear. Did he just leave? Or was it something more sinister? Other than the mystery it also funny with our heroine’s snarky best friend being a particular humorous stand-out. As well as these elements there also interesting comment on burgeoning sexuality and feminine sexual power. Although what you will probably most remember is that hilariously horrifying end.

Overall: While not all of the shorts were winners none of them were duds either. All of them had some merit and all in all it was a good showcase of some of horror film’s future talents.