Not just content with taking over television with their original content Netflix more and more are aiming to do the same with the movies releasing a number of Netflix original films. These are not just your regular TV movies either as this year we have already seen critically acclaimed releases such as Okja and the Meyerowitz Stories (New and Selected) coming from the company.

The Babysitter is one of their latest releases and more specifically their most recent delve into the horror genre. As this is kind of like a horror spin on Home Alone. Oddly a very similarly themed movie, “Better Watch Out”, will be coming out in the UK in just next week. 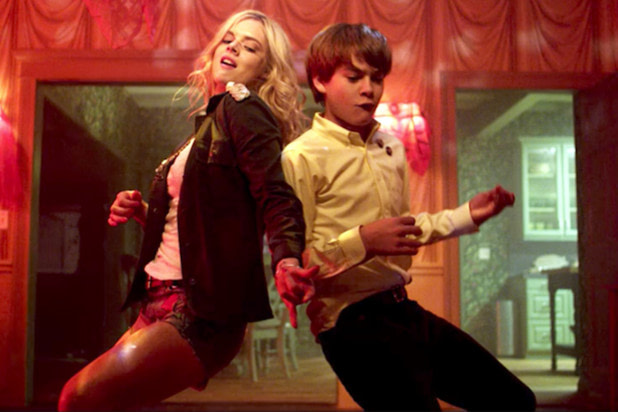 That is not the only odd thing here though as McG the movies director is not known for his work in the horror genre, bar exec producing Supernatural, and is most noted for his action work. Not that he is a director who has had much critical love over the years with his biggest films, “Charlie Angels”, “Charlie’s Angel’s: Full Throttle”, “Terminator: Salvation” and “This Mean’s War”, generally receiving responses running the gamut from tepid to outright hostile.

It is not likely that this film will do much to change that. Not that is outright awful or anything but it is not exactly very good either. The basic set-up is fun though as our main protagonist Cole (Judah Lewis) decides to stay up late to see what his babysitter Bee (Samara Weaving), who he has crush on, gets up to with her friend when he goes to sleep. Obviously he thinks it is something sexy but turns out Bee is the head of a fledgling satanic cult (this is not a spoiler as you will know this if you have seen the trailer). 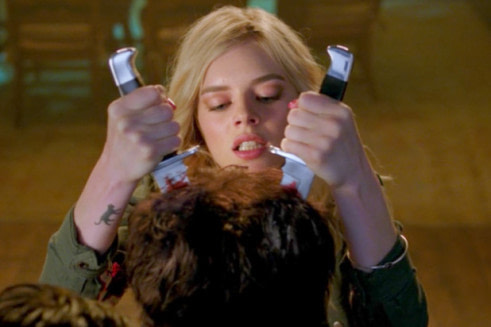 One of the early strong point, before this revelation, is the relationship between Bee and Cole which is genuinely quite sweet and given she is supposed to be in her late teens and he is 12 manages to stay just the right side of creepy. This strength is somewhat offset by the knowingness of the film right from off. Now everything from “Scream” to “Cabin in the Woods” have shown this does not have to be a minus and can be done well but here it is done in a fairly clunky and grating way. Also the flashy graphics that splash across the screen to introduce characters or show up certain phrases seems like a forced attempt to seem “hip”. As well as that both McG’s action movie and music video backgrounds are plain to see as there is an overabundance of freeze frames and hyperactive camera work.

Once the horror kicks in there is definitely some fun to be had, as the gore effects are decent and some of the kills are pretty funny, as many of Bee’s friends and fellow cult member accidently walk in to their own death. Again though many a horror fan will feel this device was better used in “Tucker & Dale Vs Evil”.

On the plus side of the ledger the cast are mostly good. Both Judah Lewis who  goes from scared little boy to mini badass and Samara Weaving who goes from sweet, funny, pop-culture referencing babysitter to fiery, psychopathic, satanic cult  leader are excellent in their roles and are the beating heart of the movie. Robbie Amell should also be praised for making the most of his psycho jock character, delivering some of the movie’s funniest lines and stealing most of the scenes he is in.

Overall: There is some fun to be had here as it is fast-paced, there is some decent kills, and a few very good performances. However there is a sense the movie thinks it is way smarter than it is, it is frequently heavy handed and clunky in execution and there is an overarching sense that much of this has been done better elsewhere.