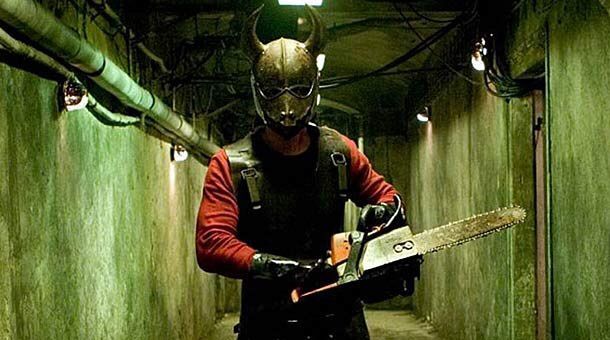 Eli Roth, is easily one of the most divisive writer/directors in modern horror. To his detractors, he is the purveyor of tasteless pornographic violence that is without substance or merit. To his supporters, he is frequently misunderstood and makes deeper more meaningful films than many critics would have you believe. Probably more than any of his movies it was “Hostel” that cemented these positions. Plus it remains perhaps the most controversial feature of Roth’s blood-splattered career to-date.

​Now it must be said “Hostel” is not a movie your writer here is particularly a big fan of at all. However, it would be remiss not to include at least one Roth picture in a survey of 21st Century horror, and in terms of impact and influence it seemed like the go-to picture (with his debut “Cabin Fever” not far behind). Also, it should be mentioned that while I may not be a great lover of the movie that does not necessarily mean I go along with the accusations of its most ardent critics as it being pure trash or “gornography.” No, there is some decent stuff here it just there also some dunderheaded stuff as well. As some things feel like they are there for little other than shock value. This mixture is often the case in Roth film which makes him one of the more frustrating directors to be covered here.

The film has interesting origins too as Roth was considering directing one of the many horror remakes he was offered in the wake of the success of “Cabin Fever.” However, Quentin Tarantino, who produced this picture, advised Roth that he was better developing an original project which he duly did. Coming up with the plot idea after coming across a website for Thai “murder vacations” which the filmmaker was unsure whether it was legit or not. Either way, it provided the seed that would turn into this work.

Now despite whatever flaws there may be here the conceit of the film is a decent one. The concept that there is an exclusive club that offers up torture victims to the highest bidder is both interesting and weirdly plausible. The satirical point it seems to be making is that in this consumerist free market driven world everything can be bought even human life. This satirical commentary may not pierce much further than the surface level, but it shows there is a modicum of intelligence behind this script that is possibly missed by Roth haters.

Not that there is much sign of intellect in the pictures opening act which plays out like a frat-boy comedy; not dissimilar to previous year’s “EuroTrip.” As our protagonists American buddies Paxton (Jay Hernandez) and Josh (Derek Richardson) along with fellow traveller Icelander Oli (Eythor Gudjonsson) cavort their way through Amsterdam looking for hook-ups before hearing from a sleazy bloke in hotel if they are really looking to get laid with loads of beautiful women they should head to Slovakia. A land that he alleges has a limitless supply of sex-starved ladies. Our “heroes” duly head off their upon hearing this which is, of course, where their troubles begin. Though not before they have some fun with Natalya (Barbara Nedeljakova) & Svetlana (Jana Kaderabkova) who unsurprisingly turn out to be not as innocent as they appear.

In fairness to Roth, there could be some satire going here too. A commentary on the boorishness of Americans abroad and Roth has even said himself that he made “Amsterdam purposefully look like an X-rated Disneyland.”[1] However that defence only goes so far as while some scenes could be seen as wry commentary much of it comes across as merely being crassly sexist. You also sense Roth is trying to have his cake and eat it both mocking that culture as well as inserting scenes that have no purpose other than to pander to a teen boy audience.

This opening act also initially makes it very difficult to root for these characters that we know are going to be tortured. Granted, it is not essential for films to have likable protagonists but given the set-up it kind of helps. It should be said though the fact Paxton does become a fairly likable hero is a testament to the acting of Hernandez. His performance is by far the strongest on display here, and it is one of the highlights of the film.

There are other highlights too such as Roth’s use of location as the building used for the torture facility, in reality, an unused wing of a mental hospital in Prague, is incredibly creepy and Roth uses it to maximum chilling effect. Also, the headlining catching horror scenes such as the Achilles tendon slashing and the retina snip are truly disturbing and will make even hardened gorehounds sit uneasily in their seat. Away from the torture sequences, there is also some fun scenes particularly those that rotate around a group of homicidal kids who will do anything for bubble-gum.

What is less well handled is the tonal shifts. With the movie moving from its larky knockabout opening act to the torture-based second and then closing in almost action movie style with a daring escape and a car chase. These gear shifts seem clunky and jarring. Although I am sure, some would argue Roth intended it to be jarring the genre-hopping never quite works in the way it does for example in a Miike film. Talking of Miike, it is clear he was an inspiration for Roth with this film in terms of tone. And funnily enough Miike even makes a cameo here.

Despite its many flaws and its off-putting opening half hour “Hostel” remains a cult classic in many horror fans eyes and for those of you reading who have not seen it is probably worth checking out once if nothing more than that. Plenty of critics may disagree with that assessment the movie receiving mixed reviews when it hit cinemas.

The movie also caused a hailstorm of controversy in Slovakia, where it is purportedly set, for the films negative depiction of the country. Roth argued though that the representation was supposed to be seen through the prism of American stereotypes saying: “Slovakia in the movie, it’s not really Slovakia. It’s Movie ​Slovakia, and it’s based on American stereotypes.”[2]

Not that any of the controversies harmed it at the box office, in fact, it probably boosted it, as the film took in $80million worldwide on a mere $4.8million budget. Given it was such a hit at the box office a sequel seemed inevitable and so it was with Eli Roth returning to make 2007’s “Hostel II” which does the same thing this movie does but worse; the major difference being the protagonists are female instead of male. That looked like it franchise-wise but there was to be one more with  “Hostel III” arriving in 2011 but this time there was no Roth, it was direct-to-DVD and went by almost completely unnoticed.