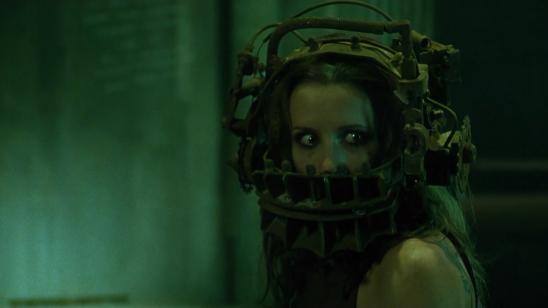 Not for the first time in this series the one film per director rule became difficult when assessing the career so far of James Wan. Wan may not be one of this writer personal favourite horror directors, but it is inarguable that no horror director has been more successful since the turn of the millennium. In fact, in terms of pure box office, he is the most successful horror director of all time. Also, whether you are a fan or not it is pretty staggering that he co-created not one, not two but three of horror’s most successful franchises in the Saw series, The Conjuring Universe and the Insidious franchise.

Part of the reason it seems to be remembered that way is the scenes with the elaborate torture set-up devised by the Jigsaw killer are amongst the most memorable. Particularly the reverse-bear trap sequence (which also featured in the short which preceded this film and is now referred to as “Saw 0.5”). Not only are these scenes the most striking they are also the most inventive in what could have been a relatively conventional serial killer thriller.

Torture scene’s aside the thing that stood out about the movie was its brutal, nihilistic tone. The mood here standing in stark contrast to the tongue-in-cheek tone of many horror movies of the time that were still desperately trying to cash in on the “Scream” formula. Here was a film instead harkening back to the darker horror of the ’70s or early ’80s. Also in terms of plot with its complex flashback-within-flashback structure, it cut above your generic killer slashing down teens plot. Not that “Saw” was entirely original as clearly, it owes a great debt to “Seven.” Not only having a very similar visual aesthetic to that film but the scenes where Detectives Tapp (Danny Glover), Kerry (Dina Meyer) and Steven Sing (Ken Leung) discover the bodies of The Jigsaw Killer’s torture victims feel identical to the crime scene scenes in “Seven.”

The likeness to “Seven” extends beyond that and into the central conceit that this is a killer who kills with a twisted moral logic. In the case of John Doe as a biblical punishment for the “seven deadly sins” while in the case of Jigsaw (Tobin Bell) punishing those he believes to be squandering life spurred on by his own terminal illness. The parallels, as demonstrated, are evident but to say it is a simple pale imitation, as some critics of the time did, would be to overstate the case. As not only is there a clear difference in the motive the central killers also feel different too. John Doe’s character comes across a semi-realistic portrait of a serial killer whereas Jigsaw from the off feels more like purely horror bogeyman villain in the model of Jason or Michael Myers even if there is nothing supernatural about him.

Indeed, for all the movie’s grimy and grimly believable trappings there is also some over-top more campy horror elements too. Chief amongst them being Jigsaw himself. This element is most clearly seen in a scene where Detective’s Tapp and Sing nearly capture Jigsaw only for him to slip through their fingers in true comic book villain style. On top of that he is wearing a ceremonial hooded robe for dramatic effect. Granted this is done so as to hide the identity of the true villain of the piece until the twist at the end. Also, what a twist it is with the “corpse” that had been on the floor between Dr. Gordon and Adam suddenly rising up and revealing himself to be “Jigsaw.” We suddenly realise that this is John Kramer whom we had early observed in a blink-and-you-miss-it scene where we see him in a hospital bed.

Now, you could argue the twist stretches plausibility too far. You may also argue that it is annoying because it is one of those twists that there is no real way to guess. However, that being said it is a pretty damn effective twist in the tale and must rank up there with horrors most iconic twists. Curiously, while many saw this ending as the creators leaving a door open for a sequel the creators see it differently. With writer and star Whannell saying in a 2010 AV Club interview: “…there is something about that ending of Saw we thought was quite final, that door shutting and everything going dark.”[1]

Things did not work out that way with the series almost becoming a Halloween tradition for a while spawning seven sequels (Saw II-VII plus Jigsaw). Unusually unlike most horror franchises all of these sequels reached cinemas and turned it into one of the most successful horror franchises ever with only “The Conjuring” and “Alien” franchises drawing more at the worldwide box office. Not that financial success equals critical acclaim as most of the sequels were rightly panned critically. Moreover, for all its status in the horror pantheon now even this film received mixed reviews at the time. In all fairness, though some of these were clearly came from critics who are sniffly dismissive when it comes to horror and “Saw” both now and in times to come will be remembered as a significant entry in 21st-century horror.