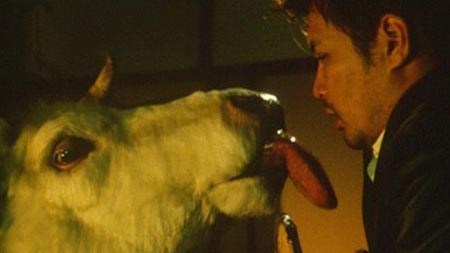 Takashi Miike is one of the most insanely prolific directors of recent times having made over 100 features since his debut back in 1991. Miike is has worked in many different genres but is most renowned for his horror and yakuza films. He also has a reputation for making films that are extremely violent and bizarre although this as he also made period pieces and even family-friendly fare like “Zebraman.”

When it came down to pick what Miike film to include here, it was a tough choice. First, there is “Audition” the film that still stands as his finest. However, that could not be included as although it got its Western release in 2001, it is a 90s film coming out in 1999. Next, there was “Ichi the Killer” again a great film, but the question became, is it a horror? In the end, though despite all that films gore it just does not feel like a horror movie but just a grotesquely violent action film. Removing those two left your writer here with three options “Visitor Q,” “The Happiness of the Katkuris” (both made in the same year as Ichi the Killer) and this film. All three are great, and all three are almost equally bonkers; however “Gozu” is possibly the most bonkers. And this is certainly saying something considering “The Happiness of the Katukuris” is a comedy-musical-horror which features Claymation zombies and zaps from farcical comedy to bloody murders to song and dance numbers. The other reason I landed on this film is it is one of my personal Miike favourites and I feel it does get the recognition of the others mentioned.

Granted the movie is not precisely audience friendly. You will also have a good idea of whether this is the kind of picture in the opening ten minutes as the first scene is demented. The film opens with a fuzzy TV screen then we get a series of unsettling hard-to-make-out images and garbled conversation. Panning out we see a restaurant filled with Yakuza members waiting for their boss in a restaurant while the garbled conversation from the TV continues to underscore the scene to discombobulating effect. The next thing we know one of the gangsters Ozaki (Shô Aikawa) is informing the boss (Renji Ishibashi) that a Chihuahua he sees outside the restaurant window is a “Yakuza attack dog.” Ozaki then proceeds to beat this poor pooch to a bloody pulp including swinging it around his head and smashing it against the window.

In terms of opening gambits it is a startling one and sets the surreal and unsettling tone for the rest of the movie through most of the rest is neither as frantic nor wacky as this beginning. In fact, one of the criticisms frequently levelled at the film comes down to the languid pacing over its 129 minutes. The running time is another beef some had with it. In fairness, there are periods where the plot stalls a little and the running time does feel overstretched. The languid pacing it could be argued suits the mysterious and unnerving atmosphere Miike creates. For those willing to take the ride, “Gozu” is the kind of the film you truly inhabit the journey it takes you on rather than just let wash over you. It is a film packed with symbolism and metaphor which can be debated long after viewing.

The journey we go on focuses on Minami (Yûta Sone) who is assigned to take Ozaki to Nagoya to have him taken out after his mental breakdown. Minami reluctantly accepts this assignment as he sees Ozaki as a mentor figure plus he once saved his life. Things are made easier after a situation goes down where Minami accidentally kills Ozaki. Or not, as the case may be as upon stopping at a café in Nagoya Minami returns to find Ozaki gone. The majority of the rest of the plot concerns Minami’s search for Ozaki.

The above synopsis makes the remainder of proceedings sound like a fairly straightforward mystery. As you will have gathered that is not the case. At this juncture, we come to another of the movies perceived failings its disjointed nature. Now disjointed it most certainly is oft resembling a series of bizarre vignettes rather than a cohesive narrative. However, these weird snapshots are eminently engaging, and the wacko grotesques who seem to populate Nagoya and torment Minami are strikingly memorable. From the Innkeeper who lactates industrial quantities of the milk to the Yazuka who has a half white face to a guy who obsessively says the same thing about the weather in any scene, he appears. And frankly, that is the tip the iceberg of all the weird goings on here.

In many ways, the film is like nothing you have seen being its own very strange beast. That said it is not entirely without reference point as there is a clear Lynchian feel to proceedings with the likes of “Twin Peaks” and “Lost Highway” particularly coming to mind. The latter mainly coming to mind due to a similar dark, oppressive atmosphere and also just like in that movie one character inexplicably returns having switched genders. You never feel that Miike is trying to ape Lynch though.

In the end, while there is plenty of schizoid moments, there is the question of whether or not it is a real horror being more of a strange hybrid of different genres. Plus there is little in the way of gore or jumps. There is no question though that it sets out to disturb and there are several scenes that are bound to leave viewers icky and uncomfortable. Such as the dream sequence where Minami has a queasy encounter with a man with a cow’s head (Gozu translates as cow head) wearing nothing but pants or the truly messed-up ending that needs to be seen to be believed.

One last questions remain though, and that is what's it all about? Well like any film packed with metaphor it can be interpreted in many different ways. Some people think it is all about the rebirth of Ozaki from a violent man to a more enlightened. Some think it is about Minami’s sexual awakening (he is a virgin) while others argue it is about coming to terms with the homosexual desire he has for Ozaki. As Miike has not commented on what his intentions were, it could be all these or something else entirely. Whatever the truth it is a weird odyssey that this writer recommends more horror fans take.

Not, as mentioned, a view a lot of people take as “Gozu” received mixed reviews on release and in subsequent years seems to be generally viewed as a middling work in his extensive canon. That said as with many Miike works it does have a cult following even if one not as extensive as the likes of “Audition” or “Ichi, the Killer.”