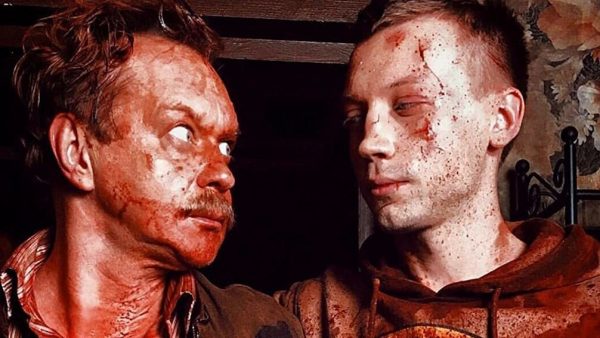 Due to the international reputations of the likes of Andrei Tarkovsky, Aleksandr Sokurov, and Andrey Zvyagintsev, certain things are generally associated with Russian Cinema. Namely meditative pacing, deep philosophical themes, melancholic colour palette, and a general level of sombreness to proceedings. None of which can be applied to Kirill Sokolov's debut feature, which is a riotous, vibrantly colourful, ultra gory action-crime comedy that goes for jugular almost from the kick-off.

Just as it is obvious Sokolov has not been influenced by the "giants" of Russian Cinema, it is equally easy to see who his influences are. Chief amongst them is Quentin Tarantino and, in particular, the Kill Bill films, which are nodded too throughout the movie. Also easy to detect is the influence of Sergio Leone as essentially, this is a western spaghetti set in a Russian apartment (complete with bursts of Morricone-esque riffs).

It would be fair to say the storytelling is economical here, and Sokolov wastes little time getting into the action. The basic set-up is a young thug Matvey (Aleksandr Kuznetsov) turns up at the apartment of a detective named Andrey (Vitaliy Khaev) claiming here is there to meet Andrey's daughter. But it is obvious he is actually there to kill him. Why? Well, that is revealed in a very Tarantino-esque style in a series of narrative flashbacks.

After some lively exchanges testing each other out, Andrey quickly realises what the script is, and the pair end up in an apartment decimating brawl involving a hammer, a shotgun, and ends with Matvey getting a television launched into his face. Oh yeah, and all this happens inside the first fifteen minutes. After this, there is little in the way of let-up as Sokolov keeps the gore flowing and the action fast-paced.

It should be mentioned while there is a very high level of gore here overall, it is not a gruesome picture as it is hard to take any of the violence seriously because most of the blood-letting happens in almost Looney Tunes-ish cartoon. And there is certainly a lot of fun to be had watching various characters improbably come back from a variety of grotesque injuries.

Of course, the downside of the violence being presented in such a way is there is a glibness to the film, which can make it a little difficult to invest in the plight of the picture's various unlikeable characters. Also, there is little here in terms of character development, with most not reaching beyond archetypes. To see this, you just need to look at Andry's daughter Olya (Evgeniya Kregzhde), who is a femme fatale straight out of central casting. The exception to this Matvey himself who is rounded out a little more and you do root for in the end.

Conversely, though, due in large part to the committed performances from the cast across the board, most of the characters are, at least, memorable. The standouts being Khaev and Kuznetsov. As Khaev is gleefully nasty as Andrey and Kuznetsov manage to give Matvey real personality with little dialogue due to his excellent physical performance. He also has excellent comic timing.

Also, depth and character development are not really the point here. The real focal point is the action, and on that level, the film absolutely delivers, and then some as each set-piece is executed with panache. Sokolov also maximises his environment as there could have been a stuffiness to the film with so much of it set in a single apartment. However, there is not with Sokolov making great use of each section of the cramped space to make it feel much bigger than it is.

"Why Don't You Just Die!" is not a dumb film either as well as the action; there is plenty of one-line zingers, memorable moments, and wry visual asides here. There are even some sly attempts at satire aiming at corruption in Russian institutions.

Overall: An over-the-top gore-soaked black comedy, which is action-packed from beginning to end. Minor quibbles aside, this is an excellent calling card for director Sokolov.