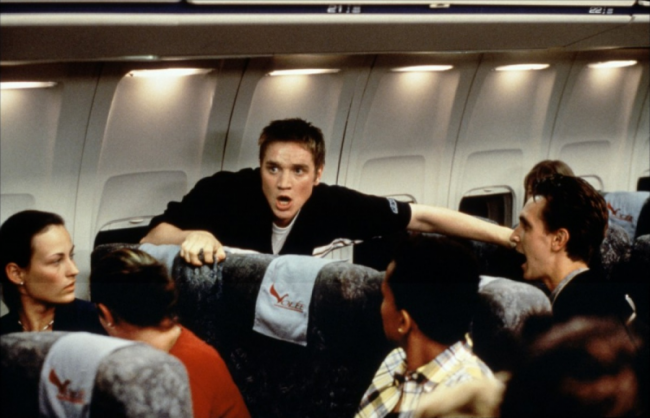 While this series delves more into the indie side of horror, I thought it silly to ignore some of the more mainstream releases. The reason for Final Destination’s inclusion is, not only did it kick one of the biggest horror franchises of the 21st Century’s first decade but also your writer here considers it to be one of the most fun franchise of the 21st Century so far. There is little doubt these are silly movies right enough, but for pure popcorn horror thrills most of the “Final Destination” films work a treat.

The 2000 original started life as an X-Files spec script by screenwriter Jeffrey Reddick way back in 1994. A fact well known by fans but maybe less known was when the first draft of the screenplay, then titled “Flight 180”, was sent to New Line Cinema, the project executive took it to read on the flight to read. A decision he changed upon realising that he was on Flight 180 from LA to New York and praying it would land safely which it did.

The X-Files connection remained as after New Line bought the Reddick treatment and brought him on to write the first draft they then brought in eventual director James Wong and Glen Morgan to rework it both of whom had written for the show. In the end, Wong and Morgan rewrote the script, but Reddick’s story and concept remained.

In some ways, the movie is quite an inventive mix of teen slasher, disaster movie & X-Files episode. The latter aspect is particularly accentuated by the two FBI Agent characters in the film. That said Agent’s Wiene and Schreck (get it? As in Robert Weine and Max Schreck, there are also several other horror referencing character names in the movie) are no Mulder & Scully. In many ways, it looks and feels like that kind of late 90’s/early 00’s Post-Scream slasher.  You can certainly see this in the casting with many of the cast coming off the back of successful teen movies or TV shows at the time such as Sean William Scott (American Pie), Ali Larter (Varsity Blue), Kerr Smith (Dawson’s Creek) and lead Devon Sawa (Idle Hands). The difference here being there is no monster or physical killer instead these teens are stalked by death itself. Not some black hooded version of death either as the studio wanted but an unseen elemental force.

There may be several outlandish and over-the-top moments in the movie, but it does have very creepy opening effectively using sound and music cues as well as clever edits to make what is really just a scene of someone packing seem sinister. The eerie atmosphere is kept well in the opening act in the lead up to the plane disaster something helped out a lot by Sawa’s performance as lead character Alex Browning who envisages the plane's explosion and set off the events of the rest of the film. Other acting performances in the movie are less decent as is to be somewhat expected in this type of movie. There is however a great cameo from Tony Todd who would go on to be a franchise regular. However, those going to see it for the great acting but the deaths. Here the movie delivers for the most part.

The over-elaborate deaths are the thing that is most entertaining and central to the appeal of the film and the franchise. Now some of these over-elaborate accidents are genuinely effective, and some are just ludicrous. Take the first post plane accident death for example. Here the character of Tod (Chad E. Donella) is killed by a chain reaction of things that lead him to be strangled by a cord in the bathtub. Not too ludicrous you would think but more so when you see the scene where he appears to be stalked by the water that he eventually slips on to fall into the tub. Even more hilariously it snakes away post-kill. That is not the most overblown or convoluted death though that honour goes to the death of Miss Lewton (Kristen Cloke) who dies in a chain of events too convoluted to go into, but it ends with her being impaled with a falling knife and her house exploding. Not that this is necessarily a complaint as it is very entertaining to watch.

The most brutally effective and best deaths though are also the simple ones like Amanda Detmer’s characters death via speeding bus or the decapitation of Sean William Scott’s character. The funny thing about the former is you know it is going to happen, but it still works. Much like a joke that you know what the punchline is going to be but laugh nonetheless.

Upon release, the movie did poorly critically but did pick up the odd positive review most notably from the late Roger Ebert who gave it three out of four stars. Also in 2010, the film was featured on a Metacritic list entitled 15 Movies the Critics Got Wrong. It is easy to why critics took against as, as previously mentioned, this is a silly movie, and few would claim stone-cold classic horror status for it. However it’s also easy to see why audiences liked it as the film has a killer concept, some great deaths and it is just very fun.

The same can be said for the franchise it spawned as, except for the fourth one, all of them are solidly entertaining films. Sure it is the same formula repeated in different settings but each entry has a lot of fun with that formula, and there are several stand-out deaths peppered throughout. The Final Destination is also one of the few horror franchises to go out on a high with many sighting “Final Destination 5” as their favourite one. That film also cleverly brings the series full circle by tying into the original giving the franchise a fitting end. We can only hope this fitting conclusion will not be ruined by the long rumoured but as of yet unmade “Final Destination 6”.