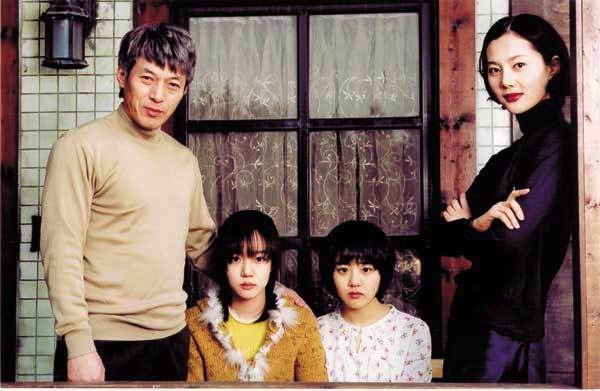 We return once again to Asian horror with this one, but instead of another J-horror outing we have our first South Korean or K-horror, as it is referred to, effort in “Tale of Two Sisters.” There are some superficial similarities to the previous Japanese works talked about previously. For instance, there are more lank hair vengeful spirits, and it does feature one scene with a twitchy pale-faced spectre. Overall though the story and feel here is entirely different.

The plot of the movie is inspired by a Jongeon dynasty era (14th-19th Century) Korean folk tale “Janghwa Hongryeon jeon” which has been adapted for the screen five times before this was made although those were direct adaptations which this feature is not. Director Kim-Jee Woon using that tale as the basis of the plot before leaping off in his own direction. A direction which curiously mixes psychological thriller, supernatural horror, and family melodrama.

Like the previous Asian horror entries, this film moves at its own pace, in no rush to speed to its denouement. Unlike the J-horror entries discussed there is more familiarity here for a western audience. There are a few examples of this one of which is the fairy tale trope of the evil stepmother (even if this not quite what it first appears, more of which later). Also, there is a distinct Hitchcockian flavour to proceedings.

The central focus of the tale is the eponymous two sisters Soo Mi (Lim Soo-Jung) and Su-Yeun (Moon Geun-Young) who are settling in again to their family home with their father Moo-Hyeon (Kim Kap-Soo) and stepmother Eun-Yoo (Yun Jung-ah). From the off it is unclear what is going on as the story open with Soo Mi in a mental hospital so when it cuts to the sisters arriving at the family home the viewer is left unsure whether she is coming back from that mental hospital or the tale is being told in flashback. The only any genre-savvy audience will be aware of is that we cannot fully trust what we see as we are viewing what is happening via Soo-Mi, who is cut in the archetypal unreliable narrator. At this point, some of you may be rolling your eyes. Yes, it would be to the say the unreliable narrator is an overused trope but it can still be effective when used well, and here it is.

Genre-savvy audiences will also sense that there will be a twist in this tale although it is a fair bet most will not guess it (kudos to anyone who does). Coincidentally the twist here and the twist in “Switchblade Romance” are similar as both involve characters with a dissociative identity disorder who are menaced by characters who turn out to be themselves. In this case, it is the version of the stepmother Eun-Yoo we have seen for most of the movie who turns not to be real, but a manifestation of Soo-Mi’s disorder and she has been switching between personalities throughout hurting herself. That is not the only twist though as we also realise that Soo-Mi has been hallucinating Su-Yeun all this time, unable to accept her death. If that was not enough, we also get a bit of another twist about the stepmother too, the real one that is. No wonder many viewers were left confused.

In all fairness, though these twists do not open up the same sort of plot holes, it does in “Switchblade Romance.” Also, the reveal does not affect the re-watch value in quite the same way as it does with that film. As the twist is cleverly seeded throughout and there is much fun to be had in spotting the clues to the reality here that you might miss upon first viewing of the movie such as the shifts in colour scheme which suggests we are moving between Soo-Mi’s reality and actual reality. Finally, while this use of mental illness as a narrative device is naturally problematic, there is obvious care been put into making Soo-Mi seem like a believable and empathetic character which means it never feels as cheap and hackneyed as it does in many films that employ similar twists.

As much as I have discussed the twist, unlike some films with a big plot reveal at the end, this movie is much more than its twist. First, off it is a beautiful film to look, and this look and design play off wonderfully with the gothic melodrama atmosphere which Kim-Jee Woon tries to and succeeds in creating.

Also, while for a horror movie the scares are relatively scarce each of the horror sequences is meticulously constructed and hits home when they do come along. The film also features one of horror’s great weird dinners which as discussed in the “28 Days Later” is a surprisingly common trope. It is in this dinner sequence that Yun Jung-ah as the imagined evil stepmother comes into her own, dialling it up to 11, all maniacal laughter and glaring eyes. The scene builds wonderfully starting as merely an awkward dinner with an over-enthusiastic hostess and then slowly cranking up to one pure hysteria and terror. Amongst several great scenes, it is the stand-out scene of the movie.

“A Tale of Two Sisters” ended being a big hit upon release becoming the first Korean horror cross-over hit as well as the biggest Korean horror of all time. In his next couple of films, Kim-Jee Woon would move away from the horror genre, but he did return to the genre for the outstanding “I Saw the Devil.” A horror movie which would easily rank as one of the best of horrors of the last decade which made the decision on which of them to include incredibly difficult with this only winning out by the narrowest of margins.

Inevitably the movie got a US remake confusingly called “The Uninvited” (2009). I say confusingly as you may assume it is a remake of that other 2003 South Korean horror film actually called “The Uninvited” or for that matter any of the several other movies with that same title. Despite a reasonable cast including the likes of David Strathairn and Elizabeth Banks typically the Hollywood remake could not hold a candle to the original and received lukewarm reviews. Thankfully it has been largely forgotten while the original remains a stellar entry in the 21st Century horror canon.