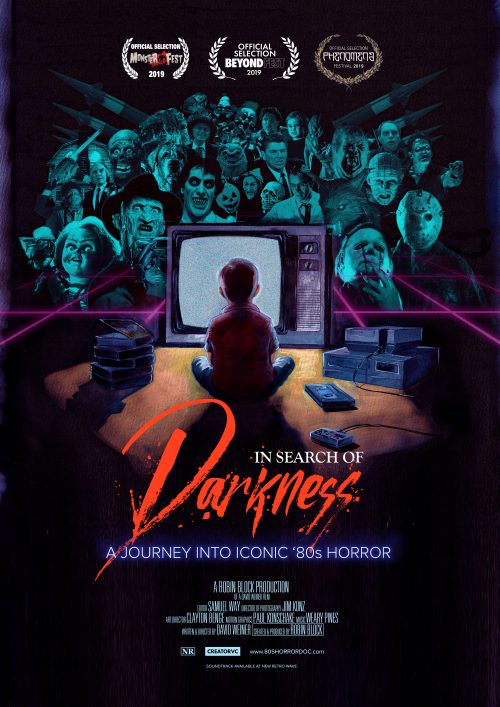 Given the current cultural obsession with the 1980s and the amount of 80s throwback horror movies that have come out in the last few years, it feels like there is no better time to look back on the decade that many (although should be said not all) consider as horror's finest.

​This is precisely what this documentary sets out to do over its gargantuan 258-minute running time as it goes chronologically through each year of the decade, highlighting a number of the most notable horror films of each year. Director David Weiner tells this story through an impressive array of talking heads including iconic horror directors (John Carpenter, Joe Dante, Larry Cohen, Stuart Gordon etc.) and stars (Babara Crampton, Doug Bradley, Heather Langenkamp, Kane Hodder, Bill Moseley etc, etc.) as well as other luminaries from the horror business. Plus, several horror pundits culled from a host of horror magazines, websites, TV shows, and podcasts and, somewhat randomly, Slipknot lead singer, Corey Taylor.

​The talking head format can often feel a bit rote nowadays, but when the roster of talking head is this impressive, then it is hard to quibble, and the vast majority of contributors are insightful and interesting. Some particular standouts are Tom Atkins, who ​provides the possible highlight of the documentary with his rendition of the Silver Shamrock theme from Halloween III and Larry Cohen, who undoubtedly has the funniest on-set stories.

​Not only does the film tell the story of 80s horror by going through films from each year but also goes is into many side topics, including why we watch horror? The most iconic villains of the 80s, the role of special effects in horror, how the genre reflected the times, and much more. Ironically given the length of the documentary, it feels like none of these topics are given enough time to breathe fully, and each topic could have probably filled a documentary on their own. ​Despite this, each is interestingly dealt with by the assembled contributors. And listening to the likes of Crampton, Langenkamp, Caroline Williams (The Texas Chainsaw Massacre 2), Kelli Maroney (Night of the Comet), Lori Cardille (Day of The Dead) and Robbi Morgan (Friday the 13th) debate the role of women in horror and whether 80s horror nudity went too far makes for particularly fascinating viewing.

The undoubted attraction of the film, though, is the discussion of ​ the decades' classics ​ from The Shining to The Thing to Hellraiser to Re-Animator to Evil Dead II, etc. from many of the people who made them. Plus, we get all of the 80's entries in the Halloween, Friday the 13th (bar Part 5), and A Nightmare on Elm Street (bar Part 2) franchises. The film selection overall highlights the most iconic pictures of the decade, but sometimes the choices seem a little screwy or at least in part influenced by the talking heads they have brought together.

Of course, drawing up a definitive list is difficult, and there will always be quibbles over what's included and what's not. But there are some notable absentees such as "The Hitcher," "Street Trash," "Maniac Cop," "Bad Taste" ​and "Prince of Darkness" (Particularly odd given we have Carpenter talking about every other horror he made in the 80s) to name a few. Also, it would be fair to say this is a mostly US-centric look at the genre of this era. As all of the great Italian horrors of the 80s' is completely ignored, as are other European classics such as "Possession."

None of which discredits the project but simply highlights just how impossible a task it is to cover all of 80s horror and its cultural underpinnings in a single documentary. But as impossible as it may be, Weiner and his assembled cast of contributors have made a more than admirable attempt at it. And in the end, it mostly does what it sets out to do in providing us with quite probably the most comprehensive look at 80s horror to date.

Overall: ​A thoroughly entertaining documentary that provides a treasure trove of fun anecdotes and insightful analysis for hardened horror hounds. The only real downside is it would have been better as 10-part miniseries.

​"In Search of Darkness" is available for pre-order here

​You can also watch the trailer for it here