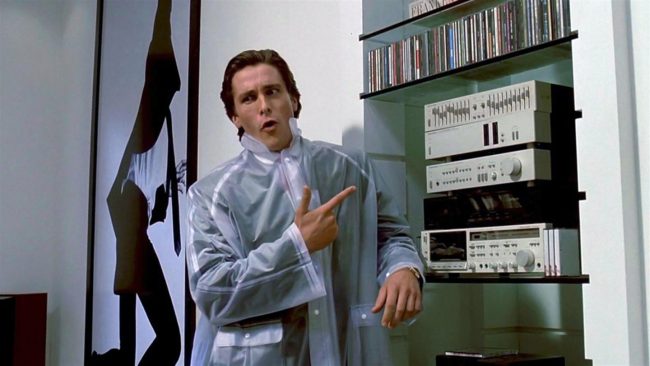 ​When the novel “American Psycho” by Bret Easton Ellis was released in 1991 it came out to a hailstorm of controversy. As it would turn out the cinematic version would be no different. In fact long before it was released in cinemas in 2000 the project went through various controversies. In some ways it is surprising it reached the screen at all with producer Edward R. Pressman originally buying the property in 1992 and turning various scripts over the years before settling on the script of eventual director Mary Harron and Guinevere Turner. This process included a script by Ellis himself which Pressman described as “completely pornographic and ending with a musical number”[1] and as interesting as that sounds it is easy to see why they did not go in that direction.

Settling on script, director and lead star Christian Bale did not end the productions troubles. First there was the wrangling with studio who thought the project needed a starrier lead which led to Leonardo Dicaprio been thrust on to the director much to her annoyance. It is easy see why as while in his current vintage it is possible envisage DiCaprio in the part, let’s face it his role in “The Wolf of Wall Street” is not a thousand miles away, back then in his post-Titanic period  he would have been ridiculous in the part. Harron well knew this but her objections only led to her being sidelined, and Oliver Stone put in her place as director. Again as great a director as Stone is satire is not really his forte and given the usual standard of his female characters you figure the film might have ended up in even more hot water than it eventually did. Both Harron and Bale held tight as they felt this version would inevitably fall through which it duly did and saw them both return to the project.

Given the events leading up to the shoot it is not surprising that the shoot itself was set with difficulty. Not that this had to do with on-set issues but more to do with outside factors such as brands mentioned in the movie pulling out or distancing themselves from it or various people trying to have the production shut down with feminist icon Gloria Steinman prominent amongst them. Another prominent thorn in the side of Harron during production was C-CAVE (Canadians Concerned About Violence in Entertainment) who linked the novel to the case of notorious Canadian serial killer Paul Bernardo. This was due to a copy of the novel being discovered on his bedside table upon his arrest. Although the copy of the novel was later thought to be owned by his wife rather than the barely literate Bernardo. The group also threatened to protest the filming throughout. In the end these protests never came to fruition however that did not stop the protests becoming part of the films myth. As Harron wryly points out “As so often happens, a tabloid frenzy had been mistaken for real life.”​ [2]

The tabloid frenzy did not abate when the movie was released. This frenzy is more connected with the times than the movie itself as this was 2000 and Post-Columbine there had been much debate about the influence of certain movies and musicians. The movie itself is not the gorefest or the exercise in torture porn you would expect if you were just reading the headlines of the time. For one up until near the end there is not a great deal of gore. Also while there are bloody set-pieces that is not the main thrust here. The movie is more focused on satirising the vanity, greed and obliviousness of this gilded class of Wall Street traders. The central joke being Bateman could get away with committing these murders under everyone’s nose as long as he follows the social conventions of high society. Then again did he commit the murders? While the novel makes it very ambiguous whether he is a murderer or just a sociopath with homicidal tendencies the movie seems to explicitly state it is latter before confusing things with the final scene. Whether or not the murders happen has been a matter of keen debate amongst horror fans ever since.

In the end it does really matter what side of the debate you fall down on as it does little to take away from this excellent. There are several stand-out moments but this personal favourite is the “Hip to Be Square” scene in which Bateman bloodily butchers Paul Allen (Jared Leto) to the sounds of Huey Lewis and the News. This is a scene of perfectly pitched black comedy and is emblematic of the film generally with it mixtures of nasty violence and jet-black. Not an easy balancing act but one that Harron manages exceedingly well. It is a great scene for Bale to show off his acting chops too as he progressively becomes more unhinged during his monologue on Huey Lewis before going completely beserk at the end, only to casually sort himself and light a cigar once the deed is done.

It is ironic that many movie insiders had told Bale the film would be “career suicide” as it turned out to be quite the opposite. As while the feature itself got a mixed critical reception Bale was unanimously praised his performance and, as you will know, went on to much bigger things on the back of it. Most of the criticism focused on the ironic gaze of the violence, misogyny and the satire being repetitive. The latter element is partially true as the story does make some of the same points about 80s materialism and greed culture repeatedly. In terms of the other criticism this seems unfair as the view of the violence is dispassionate as we the viewer are seeing these act through the lens of Bateman but never does the film empathise with that view and there is still scenes that are properly shocking. Similarly while there is a lot of misogyny on display the film never feels itself misogynistic. In fact Harron is clearly satirising misogyny.

In terms of legacy “American Psycho” spawned a truly terrible direct-to-video sequel and there was a mooted TV series that never got made. Funnily enough the former initially had nothing to do with “American Psycho” and was then retconned into being a sequel which is only notable for starring a young Mila Kunis and weirdly William Shatner. Thankfully not many people know about the sequel leaving the films real legacy as being one of the first great horrors of the 21st Century as well being a great snapshot on male narcissism (something that feels even more relevant now).