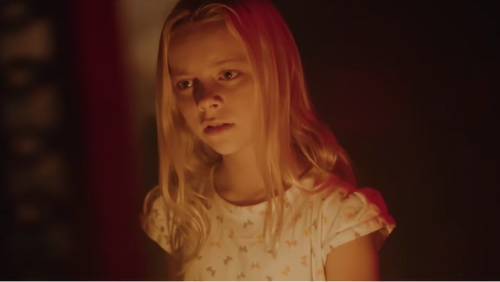 “Behind You” follows in that school of two word warning horror titles much like an “It Follows” or “Get Out”. However unlike those it has less ominous ring to it sounding more goofy than scary. It also feels like it comes straight from the horror movie title generator.

It may seem unfair to pick on the title in such a way but it also speaks to the film as a whole. Everything here feels like it has come from a how-to-make-a-horror-movie starter kit. Creepy kids? Check. Threats written in blood on the wall? Check. A character running themselves into a dead end in order to escape the demon? Check. A character remembering an important plot point they read in a book at just the right time? Check. The list could go on.

In fairness things don’t start that badly. The film opening with a flashback from 1979 (an Amityville Horror reference, perhaps?) showing this particular families first interaction with the entity haunting the home. This establishing scene is effectively creepy and has a satisfying jump scare. Unfortunately there are not enough of these in the rest of the run-time as most jumps any horror fan will see coming a mile off.

After the flashback we skip forward 40 years to sisters Olivia (Addy Miller) and Claire (Elizabeth Birkner) being dropped off at their Aunt’s (Jan Broberg) after the death of their mother. Of course, because of the previous incident, the aunt is initially reticent to take them in but reluctantly agrees. Without going into spoiler territory suffice to say the relationship between the Aunt and the girls develops in the exact way you would imagine.

Pointing this out may seem like harping on the same point but again and again the reliance on cliché and genre convention is the biggest flaw here. From plot construction to character development to the scares the filmmakers continually take the obvious turn. Even the central conceit of having evil been unleashed via a mirror has been done before and much better elsewhere. All of which would be less of an issue if it played with these cliché’s. Or if co-directors Andrew Mecham and Matthew Whedon managed to really crank up the tension. Or if it was just more out-and-out fun. None of which is true sadly.

Perhaps the most frustrating about all of this is you suspect there might be a good movie in there somewhere. Certainly it is for the most part well directed, from a cinematography point of view it looks good and the performances from Miller and Broberg are pretty solid. Maybe with a few tweaks here and there “Behind You” could have been a fun entry into the haunted house/possession movie sub-genres as it stands though not so much.

Overall: Clunky, generic and predictable. If you have watched much in the way of haunted house or possession based movies you will have effectively seen this ​pedestrian effort.

​You can purchase "Behind You" on iTunes here