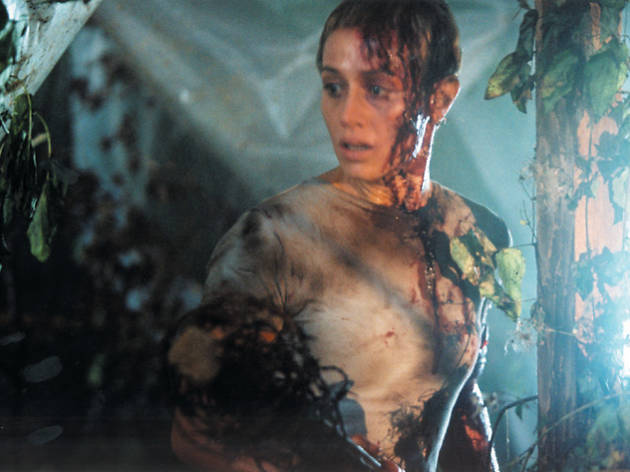 “Switchblade Romance” is neither the debut feature by Alexandre Aja nor is it the first film to be labelled under the New French Extreme label (a term first derogatorily coined by Artforum critic Jonathan Quandt). However, it was key to the development of both Aja’s career and the New French Extreme. For Aja, it brought him to the attention of an international audience. Regarding the New French Extreme, the movie was one of the first (the first was Claire Denis’s “Trouble Every Day”) purely horror features in this body of films that was at this more associated with the art-house and spearheaded a revival of French horror which would go on to include the likes of “Sheitan”, “Ils”, “Frontier(s)”,  “À l'interieur”, “Martyrs” and “Calvaire” (which is generally put under the same banner despite being Belgian).

For all the movies significance in the 21st Century horror canon, it is not without its flaws. Chief amongst them is it has one of the silliest twist endings in horror. Now if you have not seen the film and don’t want the twist spoilt for you then stop reading now. So, now that is out the way here it is basically Marie (Cecille de France), whom we assume as viewers, has been hiding from and tracking the nameless serial killer (Phillipe Nahon) who kidnaps her best friend Alex (Maiwenn) as well as brutally butchering Alex’s family is actually the killer herself and the male figure we think to be the killer is merely her mental projection.

Now as previously stated this is a ridiculous twist, but crucially it does not, for this writer at least, completely capsize the movie nor does it completely it rob the work of re-watch value (I shall concede it does make it slightly less interesting though). Also, the twist does not open as many plot holes as you might first imagine when you consider that we the audience have been viewing the events through the deluded memories of Marie. Even with that though certain scenes and events do not make an iota of sense when the twist is revealed as their times where Marie would have had to be in two places at once and others she would not have been there to witness. For example; an early scene where the “killer” is seen in his van next to Alexia’s families’ farmhouse fellating himself with a severed head before Marie and Alexia reach the farmhouse. Plus there is some interactions that make no sense such as when Marie rushes into a gas station to hide from the “killer,” and then the “killer” comes in, and the gas station attendant reacts as if its two separate people.

There are plenty of other head-scratchers you will be sure to be mulling over long after you see the film but if you are a fan of grindhouse your still likely to be a fan as there is an evident affection for those films throughout as the feature wears its influences on its sleeve. Most strongly the influence of “Texas Chainsaw Massacre” which is paid homage to both in the opening dream sequence and the chainsaw-wielding finale. Also for all the flaws, a lot of which stem from that ending, there is a lot of good here too as, much like the original title suggests, Aja certainly knows how to crank up the tension in a scene. There is also plenty to enjoy for splatter fans as there are several well-staged gory set-pieces. Again these show Aja’s horror fandom as the gory effects were provided by Giannetto De Rossi who also provided effects for the likes of “Zombie Flesh Eaters.”

Finally, the other thing that makes this a gripping movie-watching experience is the performance from De France as Marie she makes the character both vulnerable and resilient and is consistently engaging on-screen presence. Even more impressive is that due to the strength of De France’s performance you can still find yourself oddly rooting for Marie on the second or third viewing despite the fact you have the foreknowledge she is hunting down herself.

Of course, all of this is only the opinion of this critic, many critics of the time and since were less than impressed with movie only holding a 40% Rotten Tomato score and the late great Roger Ebert saying: "The philosopher Thomas Hobbes tells us life can be 'poor, nasty, brutish and short.' So is this movie."  There were several others such sneering reviews which attacked movie and director for the level of gratuitous violence and the plot logic which we have gone over. Some of them had a point, but still, you feel there is a toying with horror cliché at work here, particularly in relation to the relationship between “final girl” and killer that was overlooked or deliberately dismissed by the most ardent critics of the feature.

None of the criticism or controversy stopped horror nor did it damage the career of Aja who has gone on to direct several Hollywood horrors with mixed results. As while his remake of “The Hills Have Eyes” is one of the few modern remakes worth your time he has also made rubbish like Kiefer Sutherland-starring supernatural thriller “Mirrors,” which is itself a remake of a South Korean feature “Into the Mirror.” Aja certainly remains a fun horror director and his latest "Crawl" was particularly decent. However, “Switchblade Romance” will probably remain his calling card as nothing he has made since has quite matched its sheer visceral power (even if “The Hills Have Eyes” remake runs it close).