Tag Archives for " The Thing in the Woods " 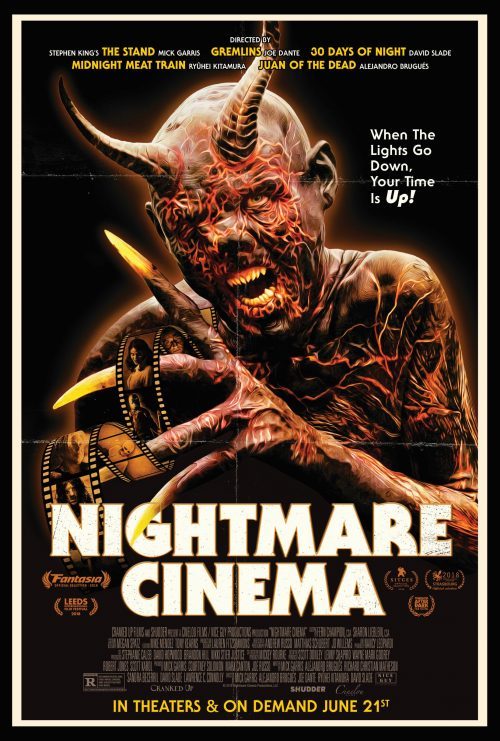 ​"Nightmare Cinema" is the latest in a long line of horror anthology's to pop up in the last decade with the format becoming particularly popular again on the back of the V/H/S trilogy. It is an anthology that comes with a real pedigree as Mick Garris conceived it as a quasi-follow-up to his famed "Masters of Horror" series. The other directors involved here include the legendary Joe Dante (Gremlins), Ryūhei Kitamura (Midnight Meat Train), David Slade (30 Days of Night), and Alejandro Brugues (Juan of the Dead).

Garris himself provides the framing device as each story begins with a character inexplicably drawn into a seemingly abandoned run by a man simply known as "The Projectionist." A sinister figure played by Mickey Rourke. Rourke fans should not get too excited, though, as while heavily advertised, he is only on screen for a couple of scenes and seems to be mainly on autopilot.

After a quick intro, then we dive into our first story, "The Thing in the Woods," which may come from the least know of the bunch (Brugues) but is possibly the strongest of the segments. The story starts as a reasonably straightforward slasher parody, but halfway through takes an unexpected and inventive left turn. Honestly, if it had stayed as a slasher parody, it would have still been very entertaining as it effectively skewers a bunch of the genre clichés, and the cast is amusingly faux-wooden but the turn it takes, takes it to a different level.

A shame then that ​the next two up can't quite match that level. Not to say that they are rubbish as they are not. In fact, both Dante's "Mirare" and Kitamura's "Mashit" are solidly entertaining. The former is a tale of weird plastic surgery that trundles along a bit but does have a wonderfully slimy performance from 60's matinee idol Richard Chamberlain and a suitably nasty pay-off. The latter is an over-the-top tale of demonic possession at a Catholic girl’s school, which does little new with that particular well-worn territory but makes up for what it lacks in originality in attitude and gore. Even if you do wish, Kitamura had pushed the goofiness a little more.

In the fourth segment, "Welcome to Egress," we reach the peak of the opening story again as Slade delivers a surreal Lynchian tale set in a doctor's reception and shot in visually striking monochrome. It is difficult to say too much else about it without spoiling it, but it should be said that Elizabeth Reaser puts in an excellent performance as the possibly unhinged female lead.

After that, it is regrettable we end on the weakest of the bunch "The Dead," directed by Garris. This entry concerns a prodigal teen piano player Riley (Faly Rakotohavan), who, after a nearly deadly attack, ends up being able to see dead people. Admittedly while not terrible, this tale just feels flat with no real dramatic tension, little in the way of decent scares, and a sense that we have seen this all before and done better at that.

Overall: Like most horror anthologies, "Nightmare Cinema" is a mixed bag, but unlike most, it ends up in credit as out of the five stories; two are okay, two are excellent, and only one falls flat. All things considered a worthy addition in the horror anthology canon.

​You can watch "Nightmare Cinema" on Shudder here