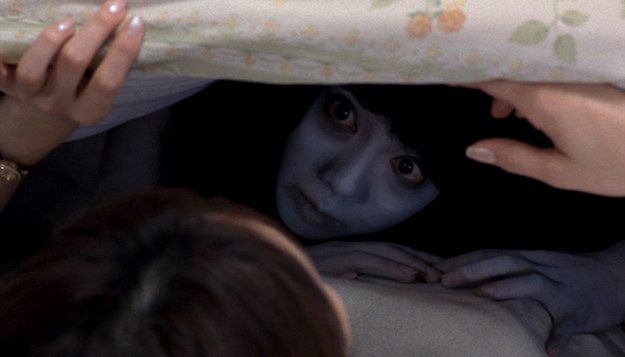 Even now if you ask people to name a Japanese horror film, if they know any at all, the most likely answer you would get is either this film or Ringu. Both of which were the most popular films of the early 00s J-Horror craze. Not that necessarily makes this film one of the best as many would consider Ju-on: The Grudge to be weaker than some other such as Ringu or Pulse (Kairo) for example. While that maybe there are still many memorable and you can certainly see the films appeal.

The curious thing about Ju-on: The Grudge is that this is actually the third entry in a long-running franchise created by director Takashi Shimizu which is still going to this day and was also the first in the franchise to get a cinematic release. You may assume that you when need to see the first two entries (Ju-on: The Curse and Ju-on: The Curse 2) to view this one, but you do not necessarily. As all of the films work both as part of the franchise and as individual films. The connecting factor being the haunted house of the deceased Saeki family. According to the film's mythology, a curse was created after Takeo Saeki (Takashi Matsuyama) murdered his wife Kayako (Takako Fuji), son Toshio (Yuya Ozeki) and the family cat in a jealous rage after finding out Kayako had a crush on another man. This curse follows anybody who enters the house and also turned Kayako into a vengeful spirit and the franchise's central antagonist.

Like all of the films in the Ju-on series Ju-on: The Grudge does not have a plot per se but is instead told in a series of loosely connected vignettes. Confusing matters further, these vignettes do not unfold in chronological order, so you always have to think where you are in the narrative timeline. In the first of these vignettes, we follow Rika (Megumi Okina) as she is sent to Saeki house as a carer for a senior woman. Rika, as it turns out, is the films nominal lead as she appears in more than one of the vignettes unlike most of the other characters.

Each of the vignettes run in roughly the same order with characters ending up in the cursed house for one reason or other, the curse then following with the back home or at work or whatever and then spreading to other characters they encounter before being bumped off by Kayako’s spirit. All of which makes the film sound very formulaic and a bit boring. The former is true as Shimizu has created a blueprint for these films and is very much sticking. The latter, however, is not there is plenty here to hold your attention as there is plenty of tension here to keep you hooked into the story and Shimizu maintains a profoundly creepy atmosphere throughout proceedings.

Arguably the scares have lost some of their initial power as audiences are more familiar with the chalk-faced, twitchy, clicky ghosts that populate many a J-Horror but there is still stuff to get under your skin on the evidence here. Notably in scenes such as the one where Kayako come spider-like out a room and stalks one of the characters down the stairs in the old Saeko home or the scene where you see another set of hands in the back of Rika’s head when she is showering. Also the horrendous croaking noise Kayako is just as unsettling now as when the film was released.

Not all the jumps work, and some of the fake-out (generally cat-based) scares are more funny than scary, but the horror set-ups along with the atmosphere are where the movie, and by extension, the franchise is at its strongest. As discussed there are plenty of weaknesses too as well as the ones already mentioned it would be fair to say there is little in the way of character development and the acting is of variable quality. The movie is also guilty of the Hollywood studio horror thing of laying on the musical cues thick to signpost this is going to be a scary bit, get ready to be scared now!

These were all flaws that critics at the time pounced on, and despite its rather stellar reputation as a horror fan favourite it received decidedly mixed reviews with a current Metacritic score of 48 and an RT score of 64%.

Inevitably for any popular non-English language horror film, there was a remake, just called The Grudge, made in 2004, which is actually the same year Ju-on: The Grudge got its official UK and US release. Unusually the Sarah Michelle Gellar starring remake did not relocate the action to somewhere in the States but is still set in Tokyo. The lack of location was not the only unusual thing about the remake as the director of the remake is none other than Takashi Shimizu. The other curious about the remake is that basically a facsimile of Ju-on: The Grudge with the main difference being the English speaking cast. So if you have seen The Grudge, you have essentially seen this movie.

Shimizu also went to direct a sequel to both this movie and the English language. Confusingly unlike the original and its remake Ju-on: The Grudge 2 and The Grudge 2 have separate storylines although they do follow the same non-linear chapter based. After four Ju-on movies and two American ones, The Grudge movies Shimizu left the franchise but it very much rolled on without him as there was another direct-to-DVD American sequel released in 2009 as well another five entries in the original Japanese series. The last of these entries being 2016’s Sadako vs. Kayako which sees the antagonists of both the Ring and Ju-on franchises face off in a movie that started life as internet joke and was met with a mixed to poor reaction upon release. If you thought that is the end of The Grudge franchise though think again as there is an English language reboot set to hit screens early next month. Proof, if proof were needed, you can never keep a horror franchise down for long.